First reviews of the Goatman 7"


Norman Records
"The preorders have gone nuts with this one so I’ve been pretty intrigued to see what the fuss is all about over this debut single from Sweden’s Goat. On the A side we’ve got ‘Goatman’, with bouncy tribal drums and repetitive chant-like vocals over quite basic, minimal, filthy bass and guitar with a liberal splash of wah. It’s more upbeat than I expected from a record with purports to be influenced by the Voodoo history of their home town of Korpolombolo (how much truth lies in these claims remains to be seen). It’s reminding Phil a bit of Dungen but I’d put it more in with that new youthful neo-psych set like Hookworms and the Dalai Lama Rama Fa Fa Fa. Flip it and things get a bit freakier with ‘The Sun’ and ‘The Moon’, which run seamlessly into one another with more of the chanty vocals and repetitive beats and garagey guitars which are once again heavy on the wah, with the overall feel. There’s some flute going on here too, and the pace is pretty frantic. It’s great how they’re taking these normally-serious sounds of ritualistic psych-folk and injecting them with a welcome shot of youthful vitality and enthusiasm. This side, my favourite of the two, is like Jethro Tull gone post-punk with its spidery guitar and whirling flute flurries. Great to see some youth and exuberance back in psych rock again!"
5/5

Shindig Magazine
"Goat supposedly stem from the tiny Swedish village of Korpolombolo (a settlement that practiced voodoo before being burned out by the crusaders). Dressed in masks in a suitably satanic promo pic a similarity to acts like Gwar emerges, but rather than dealing in monstrous forms of metal Goat however trade in a cinematic rock gumbo parts Performance, Dr John, Ruth Copeland's sleazy ’70s voodoo grooves and the put together afro rock of the Demon Fuzz album. That said, the production is quite contemporary and elements of such ’80s noise droners as Loop can be picked out by a discerning ear, drawing closer comparisons to fellow Rocket acts.

This then is clearly the product of likeminded hipsters akin to the muse of Votel, Cherrystones and co. And no, it's not a bad vibe either. It's just that the real sense of both the horned one and the tunes of pioneering dark arts groovers like Graham Bond is evidently missing." 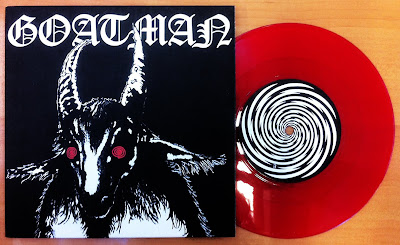 Goats debut 7" are released the 13 of February on Rocket Recordings. Limited edition of 300 copies as a taste from upcoming album. rocketrecordings.blogspot.com

The sun the moon