Goat are releasing a limited cassette tape on Swedish label LJUDKASSETT
The cassette features 2 songs. They are the previously released "The sun the moon", and a song called "Goathead", for wich a new video will be launched as well, and it got a beautiful cover made by a famous swedish artist.

This cassette release is a prerelease for upcoming album "World Music" wich will be released 20th of August 2012 on Rocket Recordings. 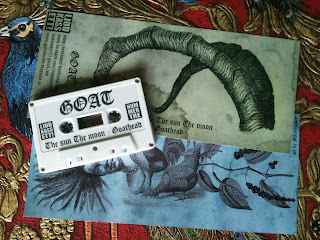